Its the Lord's to Gain

“What are you to gain from being a contributor in this book?”

It was the first thing my aunt asked when I told her about Light at the Edge of Darkness. My aunt, who is a devout Christian with an extreme nature to pursuing the work of the Lord, asked a question that I didn’t expect to hear.

So what does any of us expect to gain from being in this anthology, or any book for that matter? For me to answer that question, I have to step back to when I began writing.

At the age of nineteen, as a freshman in college, I toyed with the idea of writing. Why not? An avid reader with a wild imagination, I thought I’d at least stand a chance. Little did I know of all the technicalities of the business. Nonetheless, an innate desire lay deep within me.

Sure, it all starts with a desire, but that desire is derived from a childhood imagination and a love for books. As a child growing up I had an older brother and a younger sister. While my brother spent a lot of time playing with cousins his age, my sister cried wolf every time I came around (not without due cause). So early on, I found myself in the backyard creating my own fantasies on a daily basis.

This childhood imagination led to my love of books. Particularly sci-fi, fantasy, and other Lost Genre type writings. I loved a story that would take me to another place in time, space, or another world altogether. It acted as a release from the problems of this life.

Little did I know that when I started writing that God would place his own stamp on it, with or without my consent. It became an undeniable characteristic to my writing. There was always an underlying message from my Christian background, something that pointed to Christ.

Writing morphed from a desire into a passion. More so, a passion for Christ. I don’t want to write just anything. I want it to have meaning. I want the reader to come away feeling good about what they’ve just read. I, quickly, began to write for the Lord.

So what do I expect to gain from writing?

Nothing. Okay, so maybe it is nice to be published, and its great to get a writing credit. However, its all for the Lord to gain. Writing for Him is an honor. So if I don’t expect to gain anything then why try to be published? I want to be productive for Him. Stories give Him little glory sitting on my shelves. Getting them published means that maybe they can be a light to a dark world. Maybe, just maybe, someone will see the Light before the darkness consumes them.
Posted by Chad Lavender at 7:54 AM 2 comments:

Although this gem won't be released until September, we need to get the word out about our fearless leader's debut novel. Here are my thoughts. Enjoy. 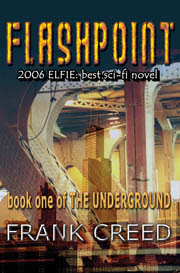 Jen and Dave live in an America where the government is their bitter enemy. In a nation where Christian Fundamentalists are labeled “terrorists”, they must go underground to survive. Their sympathizer parents, on the verge of being captured and thrown into a Rehab, stash Jen and Dave under an overpass, hoping they can evade Peacekeepers long enough to be rescued.

Every believer has a place in the Body of Christ and Dave and Jen find theirs as “Calamity Kid” and “e-girl.” They find an underground group of “fundies” who use the latest technology available to penetrate the enemy and regain contact with their families, while also reaching lost souls with seemingly no hope.

Told from Calamity Kid’s POV, the story chronicles his move from obscurity to valuable member of the fundie team. He must learn to use his new abilities within the BOC to help accomplish its goals, one being to save he and his sister’s parents from the Rehab Ward.

I admit I was a bit lost in this novel, primarily because I’ve never read “cyberpunk” before. The fight scenes proved sufficiently confusing to me because of the use of future weaponry However, that doesn’t mean Creed doesn’t write well. On the contrary, he gives us likeable characters, a believable futuristic plot and a plethora of his patented witty one-liners. The ending was predictable, but hey, I like happy endings.

It’s basically a story of persecution, survival and learning to use one’s Spirit-given gifts to encourage and assist Christ’s body of believers in the world. That theme with a post-Christian era as a backdrop made for a very original book. I applaud Creed for his originality, doing his part to again bring the lost genre of speculative fiction to light.

Forging a place for Faith-Filled Fiction

I have a friend who is working on a novel in which a character who is, for the most part, agnostic, but is marrying a devout Catholic girl. The story takes place in Victorian England, so there are some issues of prejudice, but the real intent of the story is his own personal musings on faith. In the end, the character does not undergo any miraculous conversion, merely the realization that there is more to faith than he’d previously assumed, and that perhaps he needs to give it more attention. Nonetheless, she’s concerned that she’s going to put readers off.

A week ago, a friend tried to get me a book signing at her local Catholic bookstore. The timing is bad (the owner is recovering from the post-First Communion rush), so I suggested a secular bookstore. She said she couldn’t see how she could successfully approach a secular bookstore when my book has a Monstrance—a Catholic symbol—on the cover.

I find it ironic that in a mostly Christian nation, the bookstores—esp. the sci-fi, fantasy and horror sections—are full of pictures of demons, pentagrams, and other occult symbols and books with descriptions of pagan ceremonies and magic, yet Christian writers are certain of a strongly negative reaction against their books that mention faith—either as a characterization, plot sequence or cover art.

I see this as sadly indicative of two things: how hypersensitive we have become to the topic of religion and how many Christian writers have only made the way rougher by writing high-handed, self-righteous works under the guide of fiction. Certainly not all, and perhaps not even most, published Christian writers do this, but enough have done it to give faith-filled fiction a tarnished reputation.

However, much has been said on both of these topics, so today I want to talk about what we as writers can do about it.

First and most obvious is simply to write good speculative fiction. For example, as I explained to my friend, Infinite Space, Infinite God is science fiction first, with Catholicism as its “twist.” When we put out a call for submissions, we judged first the quality of the writing, then the plot as a SF story, and finally the positive use of the Catholic faith. That’s why it’s gotten great reviews, even when most of the reviewers are not Catholic.

Second is to make the faith an integral part of the universe and the characters rather than make the characters, plot and world work for the sake of the Biblical message. In Flashpoint, for example, Frank Creed has a lot of Scripture in his story, but he’s woven it in as part of the cyberpunk universe. If it weren’t for the notations (Matthew 3:16, for example), someone not familiar with the Bible might not even realize that they’re reading the Word of God. Many successful Christian writers I’ve met have told me that they do not force the moral into their books but rather concentrate on the story and let the Holy Spirit weave its way into the writing.

Once we’ve worked our pieces so that they are quality literature with a Godly message rather than Godly literature of dubious quality, we need to promote. Not just to a narrow Christian audience, but to the mainstream. If people want a book to help them pray or learn about their faith, they may go to a Christian bookstore. However, if they want to read something for entertainment, they go to a secular one, whether independent or a big chain. If we want to reach people and sell our stories, we need to go to them. After all, Jesus didn’t just sell his stories in the Temple, nor did he tell the Apostles to preach only to a select few.

We need to go out there, unapologetic and un-apologetic. Promote your books to the secular market as a great read in the genre. Don’t hide the religious nature, but don’t hammer it, either. After all, folks should read our stories because we’re good writers with compelling tales; if they want a “Christian message,” they can go to Church or read the Bible itself.

When I promote Infinite Space, Infinite God to secular stores, I tell them the anthology has all the things that define sci-fi: interstellar and time travel, fantastic futuristic devices based on current and speculative science, utopias and dystopias garnered from projecting the trends of today. There’s even a good-old-fashioned alien abduction. Yet all are done with a twist—a Catholic world view. If I get raised eyebrows or just simple interest, I’ll go on to explain that just the Church has played an active and positive roll in science and technology for thousands of years; in ISIG, we see that roll continuing as the Church and Catholic characters use their faith and ideals as well as technology to handle the conflicts they face. Thus, this is not evangelization but the study of how technology and faith interact—and what is sci fi if not a chance to explore these kinds of questions?

Finally, once we’re out there, we need to build our audience—and we do that by being kind and encouraging, fun and informative to talk with—and by producing more great stories.

Only when we take our place as a rightful member of the mainstream--not defensively feeling like we need a special store or even a special spot in the store, but with confidence that we, too, have something readers will enjoy—will we be able to gain acceptance for our own unique take on a well-established genre.
Posted by Karina Fabian at 11:43 AM 1 comment: