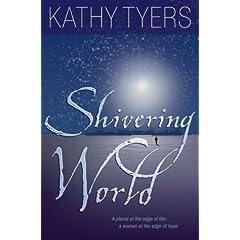 After enjoying Kathy’s Firebird series, I came back for more and was instantly riveted. Shivering World tells the story of the newly colonised Planet Goddard, where the inhabitants live in craters to escape the biting wind and fight for self-sufficiency at sub-zero temperatures. Dr. Graysha, the sympathetic main character, comes to work for the agricultural department while secretly hoping the colonists’ genetic cult has the means to heal her disability, even though this would be illegal.

It’s a thoroughly constructed world and culture, with lots of fascinating details that add to the whole picture without overdoing anything. Did you know that the 21st century will see the advent of female domination? In Graysha’s time, a little later on, the men have begun to reclaim a tentative equality, and meetings are addressed by saying “Gentlemen and ladies…” The Earth is severely polluted, and the rich and gifted have evacuated to huge habitat stations out in space while trying to make other planets habitable through science. Space flight requires fasting, genetic engineering has all but replaced cosmetic surgery, and peace-seeking people have founded the Church of the Universal Father – a conglomeration of Christianity, Judaism and Islam – although their doctrine has thus become deliberately vague.

This is the backdrop for Graysha’s arrival on Goddard with her pet gribien, which according to descriptions seems to resemble a ferret that sleeps all the time. Political tensions spring up immediately between the various groups on site, not least because Graysha’s mother campaigns elsewhere against the alleged illegal genetic activity of the Lwuite cult. While Graysha tries to comprehend the nature of the colonists’ spirituality, she survives a number of murder attempts as well as a murder accusation.

It goes a lot deeper than that when you read, though. The mechanics of life in the colony – where one solar day is nearly 100 hours long; the simple yet unusual convention for constructing one’s last name from parts of both parents’; the will to survive on this harsh planet; the story of independence on both the personal and the planetary scale. Graysha frees herself from her mother’s dominance, and Goddard colony? Well, I don’t want to spoil the ending for you. But it’s a good one.

One reason I found Graysha’s character so endearing was that she has a disability. I’ve often wondered to myself why we don’t see more disabled people as main characters in novels or even in movies, and have been writing something along those lines myself. I guess people are always imperfect. A physical problem just shows it on the outside… but it’s particularly fascinating to see it in a science fiction environment. Even the most advanced technology cannot solve all human problems.

A great writer has struck once more where the iron is hot, leaving plenty of scope for a sequel… and plenty of dramatic images burned into her readers’ minds.
Posted by Grace Bridges at 6:44 AM 2 comments:

Writing From the Pit

In God’s providence, today I read in Genesis chapter 37. This is the chapter where Joseph’s life takes an unexpected turn. It’s the part of the story where his brothers strip him of his many colored coat and toss him into a pit with plans to kill him.

I had looked forward to reading of Joseph’s life again. It’s a familiar story and easier to read when you know the outcome. But today as I read about how his brothers betrayed him and trapped him in a pit like an animal, these words stood out. “Now the pit was empty without any water in it.”

I can only imagine how Joseph felt. An empty pit was actually a good thing. No wild animal to devour him and no water to drown him or thick muck to suck him into hopeless bondage. But being thrown into a pit as you hear your future discussed like an auctioned animal would be terrifying.

Why do you think Joseph’s story is so popular even among people that don’t believe or read the Bible? It’s because Joseph’s story holds all the elements that make for a best seller. It’s full of interesting characters to love and hate, presents a riveting plot and subplots that offer twists and turns, and plenty of conflict, tension and finally resolution.

When it comes to Biblical Spec Fic, characters like Joseph offer plenty of fodder. Think of what story could be written from one of the brother’s POV. Extra details are provided as to how Ruben and Judah fought as they determined the fate of their brother. Or how about one of the slave traders—maybe the one who purchases him and sells him in Egypt. How does meeting Joseph touch his life? That’s the facet of Biblical Spec Fic that’s as endless as the writer’s imagination.

It reminded me of the story "Seeing Blind" by Daniel Weaver which is included in the Biblical Spec Fic anthology Light at the Edge of Darkness. He reached from the future to the past and connected with a familiar Bible character. His story is pure genius and one of my favorites in that collection. It’s life changing because it not only entertains, but it puts you in the path of Jesus and takes you back there again and again as the story comes to mind.

When it comes to conflict and tension, Spec Fic provides a perfect vehicle. The very nature of spiritual warfare, seen and unseen, makes for interesting plots as good vs. evil in the truest sense. In stories like Adam Graham’s "The Agent", S. M. Kirkland’s "Fair Balance" and C. E. Lavender’s "Protected," the author’s imagination connects to scriptural truth with unexpected twists and turns in settings far different from those in which I live, and yet hit home because the truth is the truth. It applies no matter the setting—no matter the character.

So for the Biblical Spec Fic writers out there, the next time you find yourself fighting writer’s block, put yourself into the pit. What do you hear? What do you smell? And what do you feel? Once you’ve completed that task, if you haven’t started writing, take a step up to the edge of the pit and look into it. Who are you and how did you get there and what difference does it make?

What people are saying about Return of the Guardian King:
Hancock's a gifted storyteller whose rich description puts you in the midst of conflict. I love the names she chose for both geographical places and characters, and an occasional light peasant accent is a lovely detail of setting. Her work reminded me of C. S. Friedman's Black Sun Rising, and When True Night Falls, but Christian. So when I learned that Karen Hancock's first four novels all won Christy Awards, I was not surprised. Frank Creed
Synopsis:
Believed dead by all but the handful of supporters who rescued him from his Mataian enemies, Abramm Kalladorne has fled his homeland to the high mountains of northern Chesedh. Traveling under a new name with a group of bitter and increasingly desperate fellow exiles, Abramm hopes to reunite with his wife in Chesedh, where he will offer his services to her father in fighting the invading armies of the Black Moon. But with every step he is hindered, delayed and diverted from the direction he desires to go, and it soon becomes clear Eidon has other plans for him.

In the Royal city of Fannath Rill, Maddie alone believes Abramm still lives. But since she has no proof, her friends, family and public opinion press her to remarry. With its neighboring realms now under enemy control, Chesedh has become the last bastion of Eidon’s Light. Desperately overmatched, it cannot survive on its own. And the rich, handsome, eastern warlord who is openly courting Maddie has a vast fleet of galley ships that could turn the tide in Chesedh’s favor…

Karen Hancock lives in Tuscon, AZ with her husband and son. She has BScs in Biology and Wildlife Biology from the University of Arizona. Her life experiences range from water colour painting to cleaning oil spill off sea-birds to homeschooling her son. Her bio is very entertaining and worth the read. Karen is a four-time Christy winner for her novels: Arena, The Light of Eidon, The Shadow Within, and Shadow Over Kiriath.