People laugh sometimes when I tell them that my idea of a romantic evening with my husband is collaborating on a story. However, when we are working together on a story, I see again all the things that made me fall in love with Rob.

Rob is an attractive man, but that isn't what drew me to him. From the beginning, it's been his humor, his analytical skills and his ability to apply his encyclopedic knowledge that I've found admirable and, yes, sexy.

As we married and our lives joined not only spiritually but in the mundane realm of shared experiences and common goals, there was still a lot to talk about and share, but rehashing what went on at work and what the babies had done that day can get old. We've always been great communicators--a result of spending our first two years of marriage with an ocean dividing us--so when we did go on dinner dates, we needed something new to talk about.

So we started making up stories.

Our first venture, nearly 10 years ago, happened while I was writing a series on different orders of nuns and Rob was involved in Artemis Society, a group trying to establish a commercial presence on the moon. Those common experiences got us thinking that someday, humans were going to have a viable commercial presence in the solar system, and the Catholic Church would want to follow--but how? We decided on an order of intrepid nuns who did dangerous search and rescue work in outer space. By working for "air, supplies and the Love of God," they undercut the commercial competition in the S&R field and forced a path for religious in space. 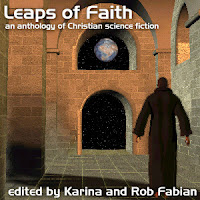 
The creative process is exciting for us. As we bat ideas back and forth and hammer out problems, I get to see Rob's mind in action in something that isn't just work related (which gets familiar and old). I can toss the most unlikely things out at him--how do you have a fistfight in microgravity? In fact, much of our collaborating is the two of us hammering out the plot, me writing, and him providing "tech support". 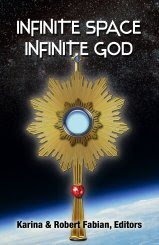 We laugh a lot, too, but we do that, anyway. Still, it's nice to do something with our unique (well, okay, odd) humor beside banter puns.

The key, though, and maybe it's selfish, but when we collaborate, he's focused on something that is just ours--not his and work, not ours and kids'--just his and mine together. And my focus is there, too--not on the house, the obligations of my other writing--just on what we're doing for fun. He challenges my mind to keep up with his, finding new angles, posing new situations. I feel smarter and stronger when we collaborate--and that's romantic (even sexy), too.

The past few years, Rob's work has taken away from our collaboration time, and I find I have to fight to get "storytime" with him. But he's always there when I have a question or a conundrum--and always with an answer that blows me away. We steal what time we can, and dream of the days when kids are in college and Rob's retired and we can really write together.
It's going to be amazing.
Posted by Unknown at 3:16 PM 5 comments: