Posted by Grace Bridges at 1:59 AM No comments:

------Heads up, our own Steve Rice's League of Superheroes is up in the running; also Donita Paul's Dragon Light.
This week at TitleTrakk:
Ted Dekker Interview
by Todd Agnew

"If you don't cringe at darkness, you are essentially becoming complicit with it. Darkness's greatest objective is to masquerade itself as a wolf in sheep's clothing."

Christian recording artist Todd Agnew sits down and chats with best-selling author Ted Dekker on Green, the Circle series, and why Ted writes so much darkness into his books.

Read Interview here.
Posted by Grace Bridges at 1:36 AM No comments:

Welcome to our series of ongoing conversations with Lost Genre Guild members. Catch them here on Mondays! 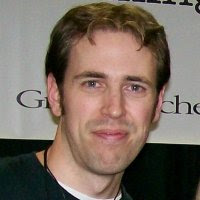 When did you join the LGG? How did you make the connection?
I joined in 2007 after self-publishing my first novel The Coming Evil, Book One: The Strange Man. I was looking to get the word out on it and always considered it kind of weird because it’s a self-described “Christian Horror” novel. I sought out Sue Dent because she, too, writes horror and is a Christian and she, along with Kevin Lucia, another horror writer who’s a believer, said I should check out the LGG. I did, and here I am.

What's the first thing you remember that happened in the Guild?
I think just hearing all the different creative voices. Everybody is trying to serve the Lord through their writing and it was just really neat to see how these people interpreted their gifts and their ministry.

Tell us some good things that have transpired from belonging.
Well, *meeting* Frank Creed was really neat, and getting to know more about his Underground series of books and getting a chance to contribute a story in the upcoming Underground anthology. I think we’re on the same wavelength as far as showing a really dynamic “action movie” version of the Christian faith and it was a lot of fun working on that with him and just meeting someone else with similar tastes. I’ve met a lot of really supportive people in the Guild, and I really feel like, if I ever needed anything, they’d be there for me. That’s a nice feeling.

What's your genre and subgenre? Why do you think that is?
I say “Christian Horror”, but I think it’s probably more accurately “Christian Monster”. I love monsters. I love that sort of 1980s campy “creature feature” vibe like Fright Night and Gremlins and—“The King”—The Monster Squad. Plus Ghostbusters (1 and 2), Lost Boys, I could go on and on. I’m not into Saw and the sort of gritty “realistic” horror. I like movies that have gravity and emotion and heart, sure, but I also like car chases, shotguns, and a one-liner now and again. That sort of fun, Saturday afternoon vibe is really missing from most horror movies these days (except for Drag Me To Hell, which was a much-needed breath of fresh air) but I hope to bring that fun back—only in the Christian genre. Growing up, I watched these movies and saw people running and screaming from these monsters, but every once in a while, a priest or some other “person of faith” would brandish a cross and send the vampire fleeing. That always excited me because, when they started talking about God and Christ, I—as a young Christian—completely related. That started me thinking, what if all of these monsters attacked a whole group of Christian believers? That sounded like a lot of fun to me. It opened up a lot of possibilities to explore faith and how we respond to evil and to God. From that, the heart of The Coming Evil was born.

Do you like to read the same genre as you write? What other genres interest you? Favourite authors?
As you can tell, I’m a total geek when it comes to my monster movies. Apart from that, I like a good war movie and I’m completely absorbed in the Star Wars mythology and Back to the Future—perhaps the greatest trilogy of all time (that’s some tight plotting!). As far as favorite authors, it’d sound completely typical to say Stephen King, so I won’t say it.

Tell us about your published work, and where we can go to find out more.
My first writing cred was the novelization of the movie Time Changer for writer/director Rich Christiano. Other than that, I’ve had “Flowers for Shelly” published in the 2nd Edition of Coach’s Midnight Diner (another LGGer, there, folks), a story called “White Ghost” on the Halloween Comics website in conjunction with a series of comics based on the quite awesome John Carpenter movie Halloween, and a short piece for the Official Star Wars website about an orphaned smuggler, the hapless bounty hunter she’s in love with, and a broken-down ship called the Dusty Duck.

What are you working on right now? How's progress?
I just finished working up a draft for the novelization of The Secrets of Jonathan Sperry. It’s a family-friendly, feel-good Christian film done by my old collaborator Rich Christiano. It’s got a good message, lots of heartwarming and funny moments (though, sadly, nary a monster in sight :p) and it was really fun diving below the surface of what you see on the screen and fleshing out the inner workings of those characters. It was a nice challenge. I believe the plan is to release the novel when the DVD comes out early next spring. Apart from that, I’m working on getting the Revised and Expanded Edition of The Coming Evil, Book One: The Strange Man picked up by a traditional publisher and out to a wider audience. I’ve had the trilogy planned for the last ten years now, and I’m ready for it to see the light of day. I’m also writing the script for Cloud Ten Pictures’ Apocalypse V and I’m always trying to break into the comic book business. So, yeah, pretty busy.

How has the LGG helped you in your work?
It’s given me new perspectives. As with any group, we don’t always agree on various topics, such as how “in your face” to be with the message, or writing style, or even doctrine, or whatever. It can get pretty heated sometimes, but that’s just because we’re all passionate. When I don’t agree with someone, it causes me to ask myself “Why don’t I agree with them?” And that helps me define for myself my beliefs and views and why I hold them. So, it’s all beneficial. Sort of an “iron sharpening iron” effect, I suppose.

What are your dreams for the future of Christian speculative fiction, and for yourself within that?
I think my biggest dream for the future of Christian Spec-Fic is for the walls to come down. Today, I see a lot of division in the camp. There are those who write from a very evangelical standpoint, there are others who like to be a little more “low key” with how they present God and the faith, and then there are others who don’t really include anything obvious at all, but just sort of have this subtle understanding that the God of the Bible exists in a particular story. Behind those decisions are very valid points concerning the nature of how to communicate God to a lost world—which I believe is the call of all Christians, whether they’re writers or not. We all want to do our part to share Christ with the world, but we don’t always agree on how to do that. I see a lot of cutting down and animosity between these camps and I don’t think it has to be there. I think people should just write the stories God has for them to tell and leave it up to Him to use them and to get the stories into the hands of the people who will benefit the most from them. There are people who are going to read The Coming Evil (I hope, anyway) who will “get it” and it will really speak to them. There are others who are going to read it and think it’s “preachy, Christian propaganda”. But they might go read another book by another LGGer and feel really moved to consider God. Isn’t that what it’s ultimately all about? Yeah, I’d love it if everybody loved The Coming Evil, but that’s a human vanity. It’s more important from where God’s standing that they just get fed somewhere. Be it in my corner of the Christian Spec-Fic spectrum, or somewhere else. So, yeah, in the future, I’d like to see less division and just more “write what God’s called you to write”.

Your best writing tip?
Again, “write what God’s called you to write”. It’s gotta start there. Yeah, you’ve got to have technique and craft and yada yada. But you could take twenty years off from your life and devote it to nothing but workshops and studying under wise mentors, and if you don’t have a passion—a heart—for the story you’re trying to communicate, it’s just words on paper.

What else are you up to that our readers would find interesting?
Between all the writing projects, and taking time to spend with my wife and our 3-year-old daughter, there’s not a whole lot of time to do anything else, ha ha.

Something you reckon not many people know about you? (such as a quirky hobby or ability)
What, liking 80s monster movies isn’t enough quirk?

You can keep up with all that I’m doing and also read FREE short stories set in my The Coming Evil universe on my blog at http://www.thecomingevil.blogspot.com