And more news from A.P. Fuchs is that some of his Coscom Entertainment titles are being taken on by Simon & Schuster! All the details are here: http://apfuchs.wordpress.com/2010/04/20/announcement-coscom-entertainment-goes-to-simon-and-schuster/

Steve Rzasa, author of The Word Reclaimed and The Word Unleashed:
http://bookreaderscentral.blogspot.com/2009/10/meet-and-greet-monday-steve-rzasa.html

Kerry Nietz, author of A Star Curiously Singing and The Superlative Stream:
http://bookreaderscentral.blogspot.com/2009/09/meet-and-greet-monday-kerry-nietz.html

Deb Kinnard, author of Angel with a Ray Gun, Seasons in the Mist, and more:
http://bookreaderscentral.blogspot.com/2010/04/meet-and-greet-monday-deb-kinard.html

Posted by Grace Bridges at 5:00 AM No comments:

New fiction at Mindflights: "Tumbling Parasol"  by Stelios Touchtidis - When a disaster thrusts a Chinese astronaut into deep space with a shrinking window for rescue, what chance will he have against the cold equations of expediency and national ambition?

And he wasn't the only one: Here's Fred Warren on fantasy:
http://goaheadandwearthepurple.blogspot.com/2010/04/genre-fred-warren.html


The next instalment of C. L. Dyck's online serial is now up:
The Moonborn Code, Part 7: Agent

C.S. Lakin says:
Announcing--The Gates of Heaven Series of fairy tales Book One:
The Wolf of Tebron is now available for pre-order by following these links:
Christianbook.com (less expensive and we like to support them!):
http://www.christianbook.com/wolf-tebron-book-gates-heaven-series/c-s-lakin/9780899578880/pd/578880?item_code=WW&netp_id=800671&event=ESRCN&view=details
or Amazon.com:
http://www.amazon.com/Wolf-Tebron-Book1-Gates-Heaven/dp/0899578888/ref=sr_1_1?ie=UTF8&s=books&qid=1271543007&sr=8-1
Please come check out our new improved site: www.gatesofheavenseries.com
Read the prologue! Comment on the blog! See why fairy tales are powerful and add your thoughts!


Posted by Grace Bridges at 5:00 AM No comments: 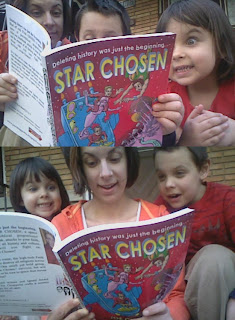 The latest major work from Silly Daddy cartoonist and Xeric Award winner, Joe Chiappetta, is not a comic book. It's a 67,000 word science fiction novel called "Star Chosen." The book took over five years to write and is a cross between Battlestar Galactica, Narnia, and of course, Silly Daddy.

"Deleting history was just the beginning. Blast off with STAR CHOSEN, a space opera of post-biblical proportions! After war, heartbreak, and the erasure of all history and culture, whose side will you fight on: the Proud... or the Chosen? In a time yet to come, the high-tech Faith War threatens to destroy all religions across the universe. One small yet bold group, known as 'the Chosen,' survives, but will they rebuild, or be torn to space dust across a cold universe?"

While the printed book is available through Amazon, the novel is also selling on Chiappetta's website as an e-Book in all the major e-Reader formats: ePub, Mobi, PDF and even as a TXT file. Star Chosen, the e-Book, sells for $5, and is  DRM-free. The book can be loaded onto multiple devices, and can be read on the Kindle, Sony E-Reader, iPhone, iPad, any computer, and any smartphone.

Chiappetta is not new to the sci-fi genre. His 1998 Xeric Award winning Silly Daddy graphic novel was also a major work of science fiction. Ironically, the imaginary gadgets depicted in that 1998 story resemble the devices that Chiappetta used in real life to create the 2010 Star Chosen novel. A Pocket PC was used to write the new story, and a Tablet PC was used to prepare the Star Chosen files for print production.

Going from the comics format to an all-text novel wasn't part of the original plan. Chiappetta started out on the project with the intent to tell the story as a weekly television series. Nevertheless, five years and 71 chapters later, Chicago area author, Joe Chiappetta, launches Star Chosen, a science fiction novel for all ages.

About:
Best known for his ground-breaking and typically off-beat coverage of family relationships, Joe Chiappetta is a husband and father of three. Residing just outside of Chicago, Joe has written and published over 20 Silly Daddy comic books, numerous zines, an ongoing webcomics blog, and now, a science fiction novel.