Welcome readers. Somehow, my blog days keep falling on tour dates. Since the LGG participates in these tours, well, someone's got to post. Nothing controversial this time. : )

First, let me preface this by stating, I have not finished reading this book. I received the book just last week (for a different blog tour, mind you) and have begun reading, but am not far enough into it to comment much. So far, I can tell you I'm hooked and anxious to finish reading.

For probably the best review I've seen so far, check out: http://spoiledfortheordinary.blogspot.com/
or any of the other CFBA reviewer sites on the blogroll at the bottom right of this page.

So, tune back in a few weeks for my official review, AFTER you've checked out the CFBA blog post below.

Robin Parrish had two great ambitions in his life: to have a family, and to be a published novelist.

In March of 2005, he proposed to his future wife the same week he signed his first book contract.

Born Michael Robin Parrish on October 13, 1975, Robin's earliest writing efforts took place on a plastic, toy typewriter, and resulted in several "books" (most between 10 and 30 pages long) and even a few magazines.

By the age of thirteen, he had begun winning local writing awards and became a regular in his high school's literary magazine. In college, he garnered acclaim from his English professors and fellow students while maturing and honing his skills.

After college, he entered the writing profession through a "side door" -- the Internet. More than ten years he spent writing for various websites, including About.com, CMCentral.com, and his current project Infuze Magazine, which is a unique intersection between art and faith which he also conceived of and created.

One of his more "high concept" ideas for Infuze was to return to his love for storytelling and create a serialized tale that would play out every two weeks, telling a complete, compelling story over the course of nine months. That serialized story eventually came to the attention of several publishers, who saw it as a potential debut novel for Robin Parrish.

In 2005, Bethany House Publishers brought Robin full circle by contracting him for the rights to not only that first book, Relentless -- but two sequels. A trilogy, to unfold in the consecutive summers of 2006, 2007, and 2008. One massive tale -- of which that first, original story would form only the foundational first volume of the three -- spread across three books.

Robin is the Editor in Chief and creator of Infuze Magazine. He and his wife Karen reside in High Point, North Carolina. Karen works for High Point's First Wesleyan Church, where Robin and Karen are members and Small Group leaders. 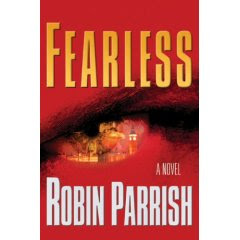 Book Two of the Dominion Trilogy:

The world changed after that terrible day when the sky burned, and now every heart is gripped by fear...

Earthquakes, fire, disease, and floods pummel the earth, and its citizens watch in horror.

But in the darkness there is hope -- an anonymous but powerful hero whom the public dubs "Guardian." He is Grant Borrows, one of a chosen few who walk the earth with extraordinary powers. But while Grant enjoys this new life, signs of a dangerous ancient prophecy begin coming true, and those closest to Grant worry he may be hiding a terrible secret.

Secrets will be revealed.

Friends will make the ultimate sacrifice.

And destiny will not be denied.

Buy your copy today at: AMAZON
Posted by Daniel I Weaver at 12:19 PM 2 comments:

The People - a review 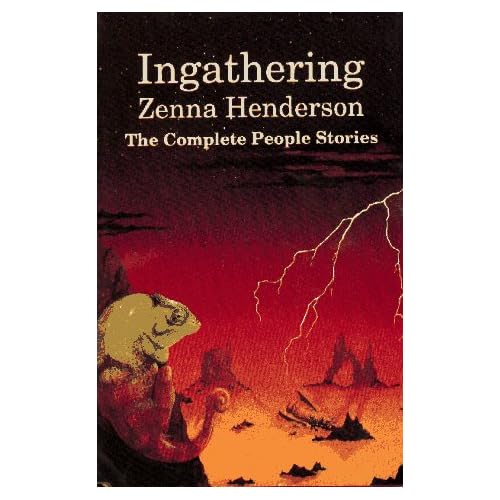 In my continuing search for Lost Genre classics, I came across a review of Zenna Henderson’s work and decided this was worth a look. A few weeks later, a very large book-shaped package arrived at my door. For a long time it stared at me from the shelf, this imposing tome with the lizard on the cover. Usually I don’t like reading books in bits, but rather all at once, so I wanted to wait until I had a lot of time. Yet this one was different, and when I was finally drawn into its pages, I discovered a whole world and a myriad of fictional biographies encased in short stories. Again and again I returned to it and read one story or two, then laid it aside again. That’s the way it works.

The stories of the People are piled together, somewhat haphazardly at first. The frequent appearance of teachers and schools lead me to an early conclusion about the author’s day job. One by one, the lights go on, and we view the history of the People and their extraordinary origins. People who can fly, and sort confused souls, and feel the pain of others. People who came from another world, who ended up in the bleakly romantic Arizona canyons, who fought to survive and preserve their legacy. People who face wicked prejudices, who let outsiders in on their secrets now and then, and who use their Gifts to heal the world they live in, as they touch it.

The words are simple, the tales straightforward, of big and small happenings. The emotions run deep, the troubles are everyday human ones, even if their cause is sometimes unexpected. I am left with the feeling that I’d like to meet some People like this, because they are – well, just so nice. As one of the blurbs says, the People are us, at our best, as we’d like to be. Their trust in the Power who gives them their Gifts is just one of the things that makes them different from other people. Sort of like Christians are different in the world, too.

This allegory aspect is well-developed and provides much of the fascination as I ponder again and again: I’m different too. I, too, trust in a Giver of gifts, and can touch the world with them if I so choose. Yes, this is science fiction. You’ll find plenty of space travel and mind-blowing possibilities. But they are not the centre. Zenna Henderson has written about the People, their struggles with humanness, their love for the Home they came from and for the Earth they live on. Their teamwork, their combining of gifts to do what is necessary. Their searches for fulfillment, their hopes and longings, and their ever-optimistic view of life.

I think I’d be more optimistic, too, if I could fly…

Check out my other recent reviews of the Lost Genre at
Grace Bridges Blog,
My Myspace Blog, and
My Amazon Reviews...
Posted by Grace Bridges at 11:33 AM 2 comments:

Fiction With a Purpose

Good verses evil is one of the underlying themes of many epic tales. It's a successful theme because it is something that every human relates to. As writers we follow the hero through our imagination on his journey through the valleys of despair and at other times climb with him to the mountaintops where the sun breaks through the stormy sky. In fact, as writers, it's fun to place the evil castle on the sunny mountain top just to mislead readers enough to catch them unawares.

In real life, Satan does the same thing. He tries to mislead. To avoid his deception, we as Christians need to walk through this world trained in the righteousness of God. If we become "dull of hearing" we will soon find ourselves not as discerning as we need to be but more gullible—like a babe. In fact, if our senses are not trained to discern, we might believe the castle at the top of the mountain is good just because the setting is sunshine and roses.

Just like our favorite characters who learn to discern good verses evil throughout the hero's journey, within the spiritual realm we are each on a quest. As part of the body of Christ, we are responsible to do our part—we are to train. How? Through our practice. "Solid food is for the mature, who because of practice have their senses trained to discern good and evil" (Heb. 5:14).

When writing biblical speculative fiction, these are the same principles that make a plot not only interesting, but something the reader can identify with. A flawed character will grow beyond where he starts in the story as a writer takes these principles and applies them to their characters as they travel into the valley or climb to the mountain top. Characters become more interesting as they grow throughout the story with their senses honed to see good and evil because they have been trained with biblical principles put into practice. And through their examples, these fictional lives can make a difference in the reader's lives. It's fiction with a purpose.
Posted by Donna Sundblad at 7:18 AM No comments: