Defining Sin: Communicating the Problem of Good vs Evil

A friend asked me how I'd define sin. This question is SO huge for modern man. In our culture's Postmodern trend, there is no truth, no right and wrong, no morality. The artistic vehicles of sci-fi, fantasy, and horror allow for the most creative settings and characters, and thusly are the strongest fiction sub-genres for dissecting morality.

Here's the key. When believers speak in our Christianese vocabulary, truths aren't understood by the lost.

My friend explained what his question was about: "I ask because Joss Whedon says he doesn't believe in sin, and yet clearly believes that betrayal of a personal trust is bad." There's a terrible dichotomy ripping-up the minds of real people. People we know. Here's their thinking: if one judges, one imposes a personally-chosen value system on others, yet when one's treated unjustly, a tension between hypocrisy and justice haunts their conscience.

There are two kinds of people. Some see morality etched-in-stone from the Lawgiver, as real as the laws of physics. Others see morality as personal decisions, like grocery shopping, personal preferences and choices. When these two debate, tar comes off the roof and neither understands why.

The following is the response I sent to my friend:

"Francis Schaeffer tells the story of a casual group discussion about morality. An East-Indian student insisted there was no right and wrong, only action. Schaeffer fetched a boiling teapot from the kitchen and held it over the young man's head. The poor lad collected his things and walked out the door.

I used this technique in an online debate once. One defender of postmodernism simply refused to acknowledge truth, and resisted the axiological argument for the existence of God. Finally in a reply to him, I pretended to lose-it and treated him rudely. When he was offended, I apologized for baiting him, but demonstrated that nobody can live as though right and wrong doesn't exist.

Those who deny sin (violating those laws written upon our hearts), cannot explain why nearly every culture that's ever existed has seen things like murder, rape, and theft as wrong. Compassion, forgiveness and selflessness are uniformly seen as noble. If there's no such thing as sin, or a Lawgiver, this coincidence is a real problem for guys like Joss."


The Christian Writer's Notebook
frankcreed.com
lostgenreguild.com
Posted by Frank Creed at 12:51 AM 4 comments:

Before I proceed, I need to make clear that I am a big "Space Opera" fan. I watched all of the episodes of all the Star Trek venues, even Enterprise (which apparently nobody else watched.) I really appreciated Gene Roddenberry's emphasis, though, on character and strong storylines that were not totally dependent on phaser fire and photon torpedoes. Nevertheless, he did sell the series to NBC as "Bonanza in Outer Space."

However, science fiction is more than just action theater in outer space. Science fiction, though considered second class literature by many critics, is perhaps the most relevant medium for exploring the societal, ethical, moral and cultural issues facing the world in the coming years. Science fiction stories which may not include a space battle challenge the reader to "think outside the box" which contains their daily experience.

Looking to television, we saw the heyday of that type of science fiction in the 1960's with the classics The Twilight Zone and The Outer Limits. The low budgets on these shows and the primitive state of special effects forced the producers to focus much more on character and thought-provoking story lines to hold their audiences. Some of the classic programs tell the power of "quiet" science fiction. Remember the Twilight Zone episode where a woman is having plastic surgery to correct her "hideous" appearance only to find that it didn't work, she was still the blonde, smooth complexioned, blue-eyed, "monster" who had to be sent away. Or what about the episode where at a certain age everyone was expected to choose one of the "approved" body types so they would not be different.

In print, I was moved and amused by "The Fun they Had" by Isaac Asimov where two children who are homeschooled in the future by computerized robotic teachers, discover a book that tells about the old days when all the kids went to school together in a building, were taught by a human teacher, and played together at something called "recess." They envied those "happy" students and "the fun they had" going to school.

Yes, I love to watch Captain Picard stand in front of the view screen and say, "Lock weapons, Mr. Worf. Fire!" but I think in some ways, I prefer to watch Commander Data struggle with his quest to discover the human quality of emotion.

It's all part of the rich tapestry of science fiction. One that I wanted to take some time to celebrate.

Speaking of Twilight Zone: Why not post your own favorite episode of the classic series. Feel free to post your favorite Outer Limits either classic or new.
Posted by Terri main at 10:41 PM 3 comments:

Sorry guys...sad to say, I don't think you're going to like this read...but mom's of the world unite!

Tales of grand fantasy can be told in so many ways. Most often, they lend themselves to ongoing series, which can mount into epic, sweeping tales. Sharon Hink has forged the cornerstone for her own Fantasy legacy with the first book of her Sword of Lyric trilogy. So, who is going to read it?

Let me add some context. I don't enjoy chick-lit. I don't enjoy romance. I wouldn't go so far as to ever bash another artist's work simply because I find its genre lacking, so anything I have to say is shared under that understanding. I do think there are a great number of people who are going to thoroughly enjoy this book, I simply want the "dudes" out there to know, I don't think it's going to be them.

So, what do we have in The Restorer? Basically, whiny soccer mom transported to magical land becomes pivotal character in the battle to stop evil.

The good: As a man, I need these injections of female perspective to remind me how much I truly appreciate my wife. Often, the mother's role is taken for granted as simply "their job" or some nonsense. In truth, any good wife is the backbone of a happy family and any good husband is going to love and respect her and treat her as such. Sharon's work, shown through Susan Mitchell's view, helped remind me that even when life seems perfect, it might not be.

The bad: There is such a thing as overkill. Perhaps, (being a man, I claim this as my excuse) what I perceive as a bit too much whining on Sharon's part is simply a testament to the unspoken truths that will unite all mother's. Perhaps Sharon simply spends a good chunk of her story relating in perfect detail what her core audience (women) is going to know, and thereby elicit both empathy and sympathy for her character's plight -- which is none other than boredom in a perfect life. I have kids and listening to them whine is enough for me.

Also, (without spoiling), the conclusion leaves a bit to be desired. Too often (yeah, I've done it too), we like to introduce some supernatural or implausible element into our conclusions to neatly wrap up a story. Well...if I counted right, Sharon introduces three, which makes parts of her ending a little harder to swallow.

The story: Let's get one thing straight. Sharon Hink knows her craft and writes well. The reading is easy, the dialogue works, etc. This is, utmost, a fantasy novel. Though drawing loosely from Biblical scriptures and geology, the reader will find him/herself transported to a different time and place. Perhaps bits and pieces of the storyline could have been better developed (I suppose you can't have a good fantasy without a sword, right? Even when it doesn't exactly make sense...), but keep in mind this is the beginning of something bigger and any conclusion you find in this novel is merely a steppingstone toward the future.


So, if you're in the market for a chick-lit fantasy where soccer mom's become superheroes (complete with superhuman abilities like healing, becoming well-skilled with a sword just in time for major battles, and super sensory powers), this book/series is probably for you. I really think mother's everywhere are going to love this story. The writing is smooth, the setting is realistically painted, the main character is so deeply shared that you know what she's thinking, and hey, it's fantasy. If nothing else, follow the link below to read chapter 1 and see if you don't want to read more.


General information about the book: 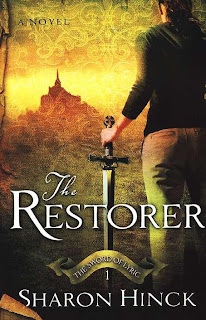 Susan Mitchell is wondering what happened to God's plan for her. Her life can't just be about cleaning, organizing her family, and being involved in damage control for her four rambunctious children, can it? When Susan opens a box in labeled "Dress Up" in her attic, her question is answered.

Upon opening the box, Susan finds herself thrust into a parallel universe where she must help bring heathens and warring territories "back to the Verses." Susan is a Restorer, a prophet like the Biblical Deborah. Together with an unfamiliar sword, it is Susan's job to show the inhabitants of this new world how Jesus can save people.

Susan has always longed to do something great for God, but can she fill this role?

While she struggles to adapt to a foreign culture, she tackles an enemy that is poisoning the minds of the people, uncovers a corrupt ruling Council, and learns that God can use even her floundering attempts at service in surprising ways. This universe will forever change how Susan looks at life, love, and family. If she can get out alive. 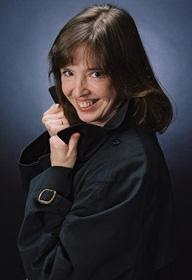 Sharon’s undergrad degree is in education, and she earned an M.A. in Communication from Regent University in 1986. She spent ten years as the artistic director of a Christian performing arts group, CrossCurrent. That ministry included three short-term mission trips to Hong Kong. She has been a church youth worker, a choreographer and ballet teacher, a home-school mom, a church organist, and a bookstore clerk. One day she’ll figure out what to be when she grows up, but in the meantime she’s pouring her imagination into writing. She’s published dozens of articles in magazines and book compilations, and released her first novel in 2006. In April, 2007, she was named “Writer of the Year” at Mount Hermon Christian Writers Conference.

When she isn’t wrestling with words, Sharon enjoys speaking to conferences, retreats, and church groups. She and her family make their home in Minnesota.

Read the first chapter of The Restorer here. To get the biggest bang for your buck, make sure and visit Sharon's blog and website too. There is so much more than just the story to experience, that you should take it all in.


Also, please stop by the other blog tour stops this week to hear more about Sharon's work. Women especially, I encourage you to hear what the other ladies have to say. I get a feeling the female half of the CSFF tour is going to praise Sharon's novel and that it's going to meet with a great deal of success.