A STRING OF BARE bulbs cast dim light down the concrete tunnel. My electric cart’s motor hummed loud in the close-quarters. The familiar sound soothed me. It had been almost a year since I drove these tunnels and wore Sparky Services’ blue coveralls. One final intersection separated me from the scene of my impending crime, and that knotted my gut.
Don’t get me wrong, I was not a member of Chicago’s most notorious underground terrorist organization. Everyone knew the Body of Christ was pure-paranoid-potato-flakes, end of story.
Believers of all flavors had been blowing things up through all of history. At least these people had a new twist. They claimed the One State government was really behind all the violence.
But who knew? I didn’t believe in truth anyway—everything was just spin and opinion. In all my months underground, the most explosive thing I’d seen was a baked bean, but I hadn’t exactly worked my way into their Elders’ Circle. 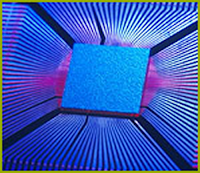 I’m in it for the money I reminded myself.
For decades Sparky Services had remained well-connected with certain people in the mayor’s office. They provided utility maintenance for more than one-third of the Chicago Metroplex. Before I joined the underground, workin’ for Sparky had been a great job. One I thought I’d retire from. But that was a different lifetime . . . a workin’-stiff’s lifetime.
When the Department of Homeland Security’s Federal Bureau of Terrorism approached me with a seven-digit onetime undercover offer, I left Sparky faster than a rock-fan at a D.J. Danglewood concert.
I put on my Casio headphone-goggles, and a virtual desktop of icons appeared before me. I poked a finger at a telephone-shaped symbol and then the re-dial option from a sub-menu. The icon flashed five times before glowing bright yellow . . .
And, you can read the rest of Miracle Micro's preview HERE . . .
Posted by cyn at 3:48 PM