Day One: Landon Snow and the Island of Arcanum 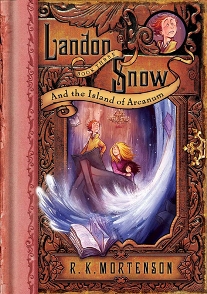 In the third of the Landon Snow series, Island of Arcanum Landon is fully involved in a football game when he begins to see animals all around him. And, not just dog and cats -- wild animals. Could the ref actually be a zebra? Coach Huddle a big hairy gorilla? wow, the opposing team appears to be made up of bears and wolves! Maybe Landon needs a holiday . . .

Well, Landon eagerly anticipates the holiday with his family in Button Up, Minnesota. The suspense builds as Landon begins to plan:


"Which meant, of course, that Landon was hoping to
sneak into the Button Up Library—the BUL—in the middle of
the night, perhaps with Holly tagging along. This time, however,
he would make her promise—cross her heart and hope to die—
that she would not follow any slinking shadows into dark corners
or down creepy stairways."


Landon Snow finds himself on a wild adventure at sea. When a huge, ark-like vessel emerges, Landon-and his sisters-join a quest to find the Island of Arcanum, where the animals of Wonderwood are imprisoned. With the help of his old friends-a horse named Melech, elfish valley folk, a girl named Ditty, and the poet/prophet Vates-Landon seeks to unlock the island's dark secrets and escape with the animals. But he must battle storms and the villainous Arcans-pirates who hoard animals as treasure. Will Landon ever make it back to Wonderwood alive?


I’m sure I’ll have temporary insomnia until I finish all three books if I actually have the books in my hands--sleepless nights for a good cause.

I'm convinced. It's time to add this series to my wish list at Amazon.

Thanks for the mention! Blessings to you...
Randy

Very nice post. And Donna, I think the books would also make great Christmas gifts, so you might want to add more than one set on that wish list. ;-)

My thought was reading them to my grandchildren who are 7 and 9.