Book Review: A Valley of Betrayal 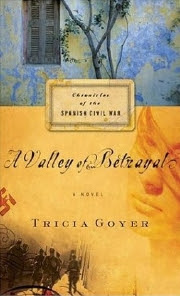 A Valley of Betrayal
ISBN: 978-0-8024-6767-6
Moody Publishers, Chicago
Review by Lydia Daffenberg
Tricia Goyer's new novel, A Valley of Betrayal, is an historical love story set during the Spanish Civil War. Fascism spills over the French border into Spain, threatening the country's Socialist and Communist ideals. Sophie Grace, an artist from America, yearns for nothing more than to travel to be with her fiancé, Michael, an international correspondent, who is living and working in Madrid. When Sophie reaches the border, she is told she will not be allowed to cross into Spain because of the increased fighting. Desperate, she accepts help from Walt Block, a reporter from New York. She quickly realizes that she is helping him as well, as they illegally cross into Spain together.

Once in Madrid, Sophie finds Michael and meets other Spaniards who are doing their part to aid the people of their country; all attempting to survive the heightened Nazi attacks. She passes up the chance to escape back to France to safety, instead, deciding to follow her heart and join the fight for the people's cause. Sophie begins to use her art as therapy for the children of the city, teaching them to express their visions and fears of the war through painting. After several tragic events, Sophie finally finds herself traveling toward the French border to leave the war behind her. But much more is in store for Sophie and for the others she encounters on her path back to safety, and her art plays another important role in the freedom and healing of Spain.
Several others make their way into Spain as well, each on their own journey through the war-torn country. Ritter Agler, a Nazi pilot, shoots for glory and the favor of a woman in Berlin while shooting Russians out of the sky and bombing the cities and villages of Spain. Philip Stanford, a trainer, and Attis Brody start out in Barcelona where Attis is to compete as a runner in the Worker's Games, but end up in the trenches of the Spanish countryside fighting as members of the Internationals--volunteer soldiers from different countries. Deion Clay, a black man from Chicago, embarks on a long trek. He hops a train with hobos to New York where he joins the communist party, boats to Europe and hikes over the Pyrenees into Spain, entering the fight against the Fascist oppression which mirrors his own people's tribulations. Finally, Father Manuel Garcia who ministers a congregation in the Basque countryside is placed in a position of further leadership, exploring his life's purpose which is dedicated to the Lord.
Goyer weaves the characters' stories together as their lives entwine, tying them in meaningful ways. Each character explores their own personal and spiritual development through their journey and through one another's experiences as well, sharing a part of this dark era of Spanish history.
Although the dream-sequence foreshadowing technique is a bit cliché, Goyer's prose hops along from one storyline to another with vivid descriptions and active dialog. The reader can almost see, hear, touch, smell and taste the Spanish countryside that rises from the pages, inviting and enticing the reader to continue on and experience this little-known story of a haunting civil war.
Goyer's creative, literary use of art throughout the novel "paints" an accurate picture of the art-appreciating culture of Spain, adding a colorful flair to the story.

Tricia Goyer is the author of five novels, two nonfiction books and one children's book. Tricia was named Mount Hermon Christian Writers Conference Wrtier of the year in 2003. In 2005, her novel Night Song won ACFW's Book of the Year for Long Historical Romance. In 2006, her novel Dawn of a Thousand Nights also won Book of the Year for Long Historical Romance. Tricia lives in Montana with her husband and three children where she homeschools, leads children's church and mentors teenage mothers.
Posted by Lydia Daffenberg at 2:25 AM

I reviewed Tricia's Arms of Deliverance on my review blog. Goyer's great with body-language. I've never seen a writer make a character alive with such a subtle tool.

I am very impressed with the research Goyer does for her novels. And, good work with the review Lyd.

Coming soon: Light at the Edge of Darkness , an anthology of Biblical speculative fiction featuring the Canadian horror author A.P. Fuchs' "Undeniable." Order your advance copies now and receive the book before the official release date! Go to: www.thewriterscafepress.com